From the letters page DDN October2019

I was happy to see a strapline on last month’s DDN that promotes the rebirth of harm reduction activism, though who knows where the money will come from for that. And then I turn the page and read the ‘Post-its from practice’. What has happened to us in terms of truly understanding what harm reduction is? It is not only clean needles and medically assisted therapies, with the possibility of more low threshold services like safe injecting rooms and increased supervised heroin/morphine prescribing.

How many people in recovery (from addiction and mental health issues), especially the ageing cohorts, need modest doses of different mood-altering substance to live reasonable and functional lives? Think codeine, selective serotonin reuptake inhibitors (SSRIs) and so on. Without these meds prescribed responsibly by our GPs, many people would be forced back to the streets again to medicate pain or depressions, which is what many daily street-opiaphiles (and others) were doing in the first place – self medicating.

Steve Brinksman’s comment about the thorny issue of de-prescribing is really dangerous for a lot of people who have finally found stability in their lives because a few GPs are willing to prescribe for pain.

What do I mean?

1) It is a publicly accessible comment that can be read by a) people who know little about any of the above but generally are abstinence aficionados and have the power to prescribe or not. b) It is given respect in a magazine read by thousands.

2) In an era when harm reduction services have suffered annihilation by a government that largely doesn’t give a damn where drug users or chronic pain patients and the mentally ill live or die – many NHS patients in fact – I think we need to be extremely careful what is published in DDN.

Allowing a respected GP to advocate de-prescribing in DDN is also so mixed-messaging. On the one hand we should be willing to prescribe more to vulnerable addicts/drug users. On the other hand, we should be pushing chronic pain patients off drugs.

While I understand the need to not over-prescribe to pain patients, I think the idea of starting to coerce any of the above patients off of drugs using the increase of drug-related deaths as an excuse is highly questionable.

We do not accidentally kill ourselves because of access to drugs, otherwise tons more of us would have died during the period when increased prescribing was available to both groups of patients. We ‘accidentally’ kill ourselves because we are homeless, hungry, so lonely and depressed and cannot see a reason to live. Researchers need to be empowered to take a more detailed analysis of what those increased drug-related deaths are really about instead of simply blaming doctors who are trying to reduce people’s pain in this very dark time.

Evidence-based treatment should always encompass a range of interventions designed to match a range of individual treatment goals (DDN, September, page 6). The problems that I have observed have often come about by expert-derived guidelines in the form of the ‘Orange Book’, together with advice from ACMD whose statutory remit is to advise governments on drug policy based on effectiveness evidence who are ignored by some politicians for perceived political expediency. 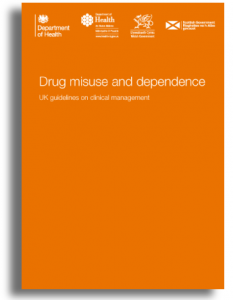 Sadly, I remember having this exact debate when the UK 2010 drug strategy was released, with abstinence-based recovery being apparently the only treatment goal allowed. Person-centred care anyone?

I don’t suppose I was alone in forecasting the tragic increase in drug-related deaths, some of which could be said to be the direct result of this policy. Whilst I wasn’t alone, I was certainly in a very small minority at the service I worked at in 2010.

There needs to be a range of interventions for different goals that individuals will have at different times in their lives – ranging from harm reduction, opiate maintenance, to abstinence-based recovery. They should all be universally available, none should take precedence, they are all equally valuable.

The sad state of affairs is, I feel, illustrated by my observation that the publication of a new UK government drug strategy is greeted by a degree of enthusiasm by managers rushing to read it that sadly doesn’t always seem to be matched by the same enthusiasm to read and study Orange Book guidelines, let alone the research referenced in the guidelines. Another beneficial change might be to move responsibility for drug control from the Home Office to Department of Health.

Danny Kushlick has announced that he’s leaving Transform after 25 years.

‘I founded the organisation when I was 32, in 1994, to campaign for an end to global drug prohibition, and to replace it with an effective, just and humane system of regulation and control,’ he said on the organisation’s blog. ‘It’s been an extraordinary trip.’

Drug policy reform has now moved from an ‘NGO ghetto’ to the mainstream, he said. ‘I’m proud that Transform’s work has helped turn legal regulation from fantasy into reality.’

Have your say: DDN conference 2020

We are now planning the next DDN conference, and we need your help. We want to make 2020 an even more interactive experience for all of our delegates, and we need to know what you want to hear about and talk about.

With the fantastic exhibition area at the centre of the event and more intimate workshops and learning opportunities than ever before, this one-day event is a unique opportunity to ensure that your voice is heard. Held in Birmingham next spring, this will be a vital opportunity to share what is working, highlight what isn’t, and work together to build better and fairer treatment for all.

Please take a moment to give us some feedback on past events, and let us know what you want from the conference – what issues are important to you, speakers you’d like to see, and suggestions for presentations.

Extracts from DDN’s social media. Have your say by commenting on our website, Facebook page or tweeting us.

Because most of these people don’t vote or consume stuff?

If you destroy social care, public housing, benefits and health this is what you get. It can’t be a surprise. It’s an intentional policy. The deaths are drug-related? No, they are deprivation- related.

In response to ‘Agents of Change’, DDN, September, page 6

When released with no job, no accommodation, no purpose, but one thing they do make sure you leave with is your methadone prescription – they at least make sure you have direction. Took me 22 years to get myself out of the addiction-offending-prison-methadone cycle all against advice of drug and alcohol services.

It’s not ethical for doctors to leave people suffering. Responsible prescribing can prevent a lot of misuse. Doctors rarely prescribe drugs that really help through the final stages of detox due to fears and stigma around the whole issue of addicts and addiction.

In response to ‘Scots drug death taskforce up and running’ (DDN website):

Legalise, regulate, consumption rooms and job’s a good ‘un. The millions spent on ‘harm reduction’ is being funnelled into the CJ system focusing on the supply lines which is completely ineffective and doing more harm than good.