Home Features Too close to home 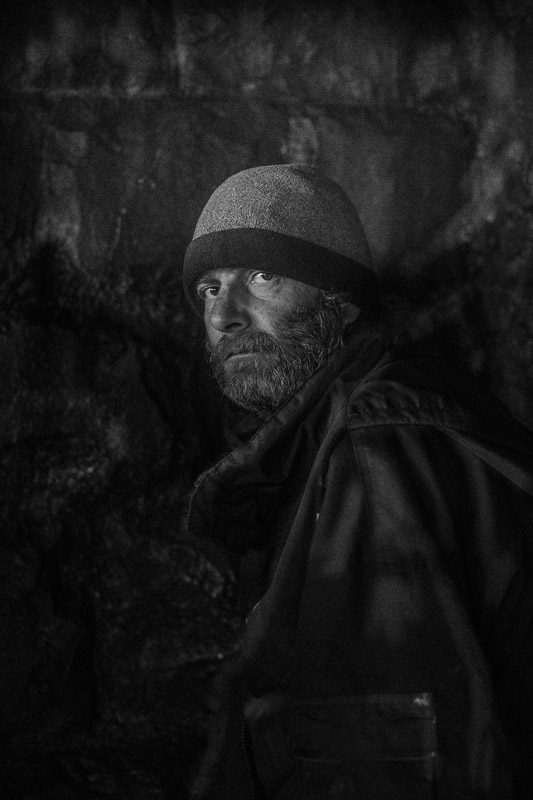 As a well-travelled photographer, Andrew McNeill was used to seeing scenes of despair. But when he set out to photograph people affected by addiction in his home town of Cardiff, nothing prepared him for the scale and impact of the deprivation on his doorstep

I had no idea just how bad the heroin problem in Cardiff was until I started volunteering at The Huggard centre for the homeless, which is not far from where I grew up. My view on heroin addiction was very limited until I delved into these uncharted waters. But to get into a user’s mind I had to throw away any prejudices I had about the drug.

I am not a heroin addict and never have been, so to get into the minds of these troubled souls I decided to hit the streets with them. I needed to get very close to get the best results; I’d walk to where they hung out, buy them beer (never drugs) listen to their stories and their problems, drink tea with them and buy them food. Sometimes I’d come away feeling quite depressed. The stories were harrowing – tales of rape, sexual abuse and domestic violence.

Once I had started to gain their trust, I had crossed the line into their world. I have photographed in some of the worst slums in Asia but this had a different feel to it – it was in my hometown, a place I love so dearly. I went through some immense highs and massive lows when meeting these people. We shared the same culture and the same feel for our country. I thought I was resilient in nature, having travelled extensively over the last 12 years in some of the poorest parts of the planet. I didn’t expect to get so emotionally involved with them but I couldn’t help it. After all, they are people just like you and me.

I became friendly with Mike. He has had problems with drink and drug addiction most of his adult life, nomadically moving around the city to various shelters and has extensive knowledge of the heroin street trade around the city. He offered to help me locate the people I needed to photograph, accompanied by his friend Ross.

I sometimes struggled with the fallible reality of it all. The world I was in seemed so strange and I began to look at my city in a totally different way.

One night while out walking, I met Lisa. She was the type of girl you’d never look at twice in the street. She looked vulnerable, sullen and at the point of starvation. She was from the Welsh valleys, an abusive home, and she’d decided to head for Cardiff where a life on the streets followed. Lisa was gang-raped a short while ago and the effect has obviously taken its toll. She drinks heavily and shoots heroin on the steps of the city’s courthouse most nights. Her eyes are empty and her stare is blank. She has been a self-harmer for many years and it keeps getting worse, the pain etched on her face.

One thing that has struck me is the amount of mentally ill people that walk our streets. Being homeless and addicted to drugs often leads to mental afflictions and other issues. I’d often arrange times and places to meet a lot of these people but it never worked out. They’d never show up, and I grew accustomed to it.

‘I come from a safe, quiet and backward village called Cwmgors. I had been for a night out at the local pub called TJ’s. As I was walking home I vaguely remember feeling a sharp pain to the back of my head.

‘I woke to find myself tied to a chair with a severe headache and I realised I must have been hit across the head and lost consciousness. As my sight began to focus I realised I was in a dark and dirty room with an old mattress on the floor. I was tied to the chair by my hands and feet and I had blood dripping from my head and hands, I could hear moaning and screaming and foreign voices and I had no idea who they belonged to as I didn’t recognise any of them. I would later realise they were either Polish or Romanian.

‘Two men then came into the room carrying a syringe, which contained a dark-coloured liquid, and the other a long rope. I tried as best I could to fight them off but I was tied and it was of little use. There was a sharp pain in my arm and suddenly I felt very drowsy and weak. I vomited everywhere as I felt I was on a rollercoaster. They started to undress me, opening my shirt and touching me. They undid my jeans and I could feel their hands everywhere. I tried screaming through my gag but I was floating on the drugs they had injected into me. They started beating me around the head and they knocked out some of my teeth. A few hours later when I came round, they came back in and injected me again.

‘This ordeal went on for two or three months. They fed me at times, but not much. I watched as other girls were brought into the room. I had no idea where they were from, as most of the time they kept injecting me. Some of the girls looked like they had lost the will to fight back and the same thing was happening to me. I kept thinking of my son and how much I wanted to be with him again.

‘What I eventually learned was that these men were kidnapping girls and controlling them with heroin in order for them to work in brothels around the country. They were sex traffickers.

‘It was pure luck that I got away. One night, all the girls were busy with clients and they had forgotten to inject me. After a few hours of rocking my body and hands back and forth, one of the ties on my hand had loosened itself and I managed to untie the rest of my body. I found a window, which I managed to open, and I just jumped, not caring if I broke every bone in my legs. I literally staggered for a few miles to a house where I managed to call for help.’

We value your input. Please leave a comment, you do not need an account to do this but comments will be moderated before they are displayed... Cancel reply