‘A couple of weeks ago I had a call from the BBC, asking if I could speak on their breakfast show about issues faced by a pharmacist in Staffordshire,’ says Philippe Bonnet, chair of the National Needle Exchange Forum (NNEF). ‘The pharmacist said he was thinking of stopping needle and syringe programmes (NSP) because of safety reasons – his staff were being abused regularly. He mentioned a couple of incidents where a service user threatened a member of staff with a used syringe, demanding they give him needles. On another occasion someone came into the dispensary with a knife, demanding their methadone and threatening to kill.’

Bonnet pleaded with the pharmacist to reconsider, asking him ‘not to punish everyone because of the actions of a couple of individuals’. He mentioned that NSPs were the reason that HIV prevalence was low in the UK, compared to Europe, and that giving out equipment is so much cheaper than the treatment for blood-borne viruses. He did not get an answer from the pharmacist when he asked him if he was going to stop dispensing methadone.

To the casual listener, the conversation on the radio may sound like discussing sensible precautions on staff protection. But for those working in harm reduction it is another red flag in a public health emergency.

The ease with which people who need these services are being dismissed is being compounded by a crisis in funding and staff morale. ‘In some services, NSPs are being forgotten about,’ says Bonnet.

Mark (not his real name) works in the harm reduction team of a large treatment agency, and says there has been ‘a steady erosion of knowledge about harm reduction approaches since 2010’. Large cuts to funding have meant ‘caseloads of increasing complexity’ and evidence-based practice being replaced by ‘a mush of dubious interventions’, including an over-reliance on urine testing.

‘Significant numbers of drug-related deaths this year, including several believed to be linked to fentanyl’ have not prompted a relevant response. ‘The focus appears to be more on data requirements rather than interventions around reducing risk,’ he says. ‘There has been no information about fentanyl circulated by the manager or the organisation, in stark contrast to the constant emails related to data needs.’ 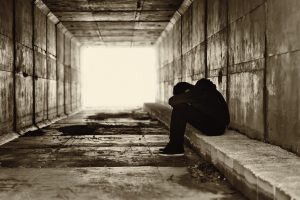 Furthermore, he sees a slide towards a deskilled workforce. Within increasingly complex caseloads, ‘much of this work is done by recovery workers who are relatively new to the field but have received little or no training other than shadowing colleagues’.

Amy (who also asked for her name to be changed, because she feels she is in a ‘speak out at your own risk working environment’) manages a needle exchange and has worked in drug treatment services for the last five years. During this time she has seen ‘the steady erosion of vital aspects of harm reduction’.

‘The stuff we know works – assertive outreach, consistent and persistent support for treatment-resistant individuals – has taken a back seat in favour of assessment, TOPS [information that needs to be supplied for the Treatment Outcomes Profile] and group work,’ she says. ‘There is so much pressure on “positive outcomes” that ultimately very little energy is spent nailing the basics. Ultimately the pressure and expectations we have to impose on our clients is mammoth. The system feels designed for the chaotic to fail – and why wouldn’t it be? Fewer chaotic clients in treatment means fewer drop-outs, fewer representations, and all of a sudden your positive outcomes and numbers are on the up.’

While Amy acknowledges some good initiatives – ‘naloxone has been a game-changer, as long as you turn up to a service to pick it up’ – ultimately, she says, ‘we know that there are so many of our most vulnerable – in the car parks, out camping behind Tesco, sleeping in the underpass – that cannot or will not come into treatment to access such potentially life-saving interventions. What about them? We are not going to get to them, that’s for certain. There’s no time, no strategy, and barely enough staff to keep the hubs running. Yet again, these folks fall through the cracks.’

As well as not receiving the immediate help they need, clients are missing out on a much bigger opportunity to engage with healthcare.

‘NSPs for many people represent the first, and possibly only, engagement with a “professional” agency,’ says Kevin Flemen of KFx training. ‘This toe-hold in a service opens up routes to so many other interventions – overdose prevention and naloxone, vaccines and BBV testing, wound care and treatment. It can be the first tentative step on a longer treatment journey.’ For many it will also offer the right environment to discuss OST and life-changing options for stabilisation – steps that not only transform the individual’s prospects, but also reduce the harm to their families and ultimately to society.

As a trainer he has a fair idea of the level of staff knowledge, and also of the level of priority that harm reduction is getting within services. At the moment he sees that we are devaluing it ‘by failing to provide space, time, privacy and resources to make needle exchange excellent. All too often, staff with no training dole out equipment with no discussion or further engagement.’ He sees that ‘some areas have no trained staff or dedicated space for NSP’. As injectors turn to using lower-threshold pharmacy services, this is seen as a further reason to keep downgrading this essential service.

Amy’s colleagues in another service from the same provider have told her about the ‘no bin, no pin’ policy there to encourage returns, getting rid of pre-injection swabs ‘for good old soap and water – great! Unless of course you don’t have access to such facilities!’, and ceasing the distribution of water ampoules because of unfathomable ‘concerns around legalities’.

According to Amy, a little investment in her needle exchange would go a long way. There are the material items that could be bought with more money – the BBV testing kits and homeless packs; and the specific services they could provide, like access to a nutritionist, wound care specialist or dentist. But what the service really craves is ‘to reduce pressure on staff, invest in quality training and nurture specialisms’.

‘One of the heartbreaking things to watch over the last few years is how so many of my colleagues with a love and speciality for harm reduction have moved into other areas of the care sector, or even out of it entirely. Why? Because it’s not worth the heartache,’ she says. ‘You either have to leave because it’s too much, or suck up your pride and principles and get on with the work at hand.’

‘Most importantly,’ she says, ‘we need to really take a step back and reduce the threshold for those accessing support – it can’t be that we turn away the chaotic, dependent injecting drug user because they are ten minutes late for their appointment. We need to be present, consistently – not just from nine to five in an office, but at 6am in the car parks and at 10pm out with the working girls.’

Amy thinks that introducing key performance indicators (KPIs) for harm reduction might be the way to regain energy and focus, and redress the attitude that ‘no one really cares about what we do or don’t do on the front end’. Having ‘60 clients on your caseload and a mountain of admin on your desk’ translates to telling the client ‘take your script and I will see you in two weeks’, instead of giving them the time and energy required for a meaningful working relationship.

‘We underestimate the power that just sitting down and having a cuppa and a chat, with no expectations, can have. We need time and we need patience, and unfortunately there is no pot of funding for that,’ she says, adding: ‘I regularly sit in team meetings in which discharge stats are sniffed out like dogs with a bone. These are people’s lives!’

Mark is also weary of the attitude that ‘NSP cover is something that can be delivered by anyone, often admin staff’. He believes that the initiative must be taken by treatment providers, in the same way that naloxone distribution has (eventually) been embraced. Just three years ago he remembers that a senior man­ager in one of the larger organisations was instructing members of staff that they ‘must not talk about naloxone as we are not a campaigning organisation’.

Many organisations are still silent about issues such as drug consumption rooms (DCRs) and heroin-assisted therapy, perhaps taking their lead from the government’s drug strategy, which (while acknowledging that we should protect society’s most vulnerable) only fleetingly mentions harm reduction and ignores the importance of outreach.

‘The providers of treatment really need to start to use the language of harm reduction and be clear about a commitment to those approaches, rather than continuing with a culture of harm reduction by stealth,’ says Mark. ‘If they don’t believe that they should do everything possible to campaign for initiatives and interventions that can reduce the numbers of deaths among their service users, then we are in an impossible situation.’

This article has been produced with support from Camurus, which has not influenced the content in any way.