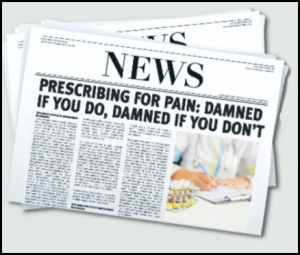 The news,
and the skews,
in the national media

The news, and the skews, in the national media.

Prescriptions for opioid-based painkillers have increased by more than 60 per cent in the past decade… With this in mind, people are inevitably comparing the situation here with the epidemic across the pond. Let’s be clear, opioid prescribing is monitored much more closely in the UK than in the US, meaning the situation here is nowhere near as severe. But that doesn’t mean we should become complacent in the face of what is clearly a growing issue.

People who live with chronic pain can become defensive if asked to consider weaning themselves off drugs that they’re dependent on. Suggesting to someone who feels paralysed by pain that they need to get out for a walk can sound offensive, patronising and uncaring. It’s certainly not a binary choice; opioid and other pain-relieving drugs have their place. But prescribing is out of control and cannot continue at these levels. There are difficult conversations to be had at all levels of our health service, right down to the intimate exchanges that happen between GP and patient.

A significant source of the problem is that GPs feel both ashamed and embarrassed that patients have become hooked on medications that they have prescribed, so they simply avoid facing up to it. It’s an awkward truth that sometimes the pills we dish out can cause more problems than they ever solve. Yet doctors, increasingly left frazzled by the growing pressure they are put under, are still all-too-willing to reach for the prescription pad when confronted by a patient with complex psychological issues.

One thing is clear: while those sitting in jail for weed may be black, when cannabis legalisation eventually hits our shores, it will be dominated by white men in suits.

The once poorly understood phenomenon of county lines drug dealing is taking firmer shape in terms of public policy and also of awareness. The emerging picture is disturbing even to those familiar with the most destructive consequences of illegal drugs… There is no point in pretending that there is any quick fix. But a sensible first step would be for the government to put youth services on a statutory footing – and to fund councils properly to deliver them.