Home Features Just Be Yourself: support in the LGBT+ community

Robert Mee grew up feeling that he didn’t belong and used alcohol and drugs to counter his loneliness. Now, as chief executive of a thriving LGBT+ charity, he shares his story to reach out to others.

I was born in a women’s prison in 1972. I was taken away from my birth mother and fostered, then six months later my mother was released from prison and got me back – but sadly only for a short while. I was taken away by social services and the lovely couple who had fostered me decided to adopt me. Growing up, I knew none of this.

When I was around seven years old my parents told me I was adopted, and they spent hours explaining how I was loved and their real child. But that was not what I heard. All that got through to me was that my mummy didn’t want me and nor did my daddy, and I couldn’t understand why.

Obviously at that time I had no idea about safeguarding children and how it worked. I was in a lovely caring home and loved by my parents, yet inside I felt as if I didn’t belong. It was as if a bomb had gone off in my head: why didn’t my birth parents love me?

As I got to around 11 years old I started to struggle with my sexuality, although at the time I didn’t quite know what I was struggling with. I went to church every Sunday and that’s where I learned to drink with the other altar boys – after the service, any wine left was ours. I also heard in church that ‘man shalt not lie with another man’. When I started to realise that I fancied my best friend more than I fancied my girlfriend, this was quite difficult.

Slowly I found out what and where cruising areas were – and that there were plenty of them about 20 miles away in the nearest town. It was probably not something that a 14-year-old should have known about. 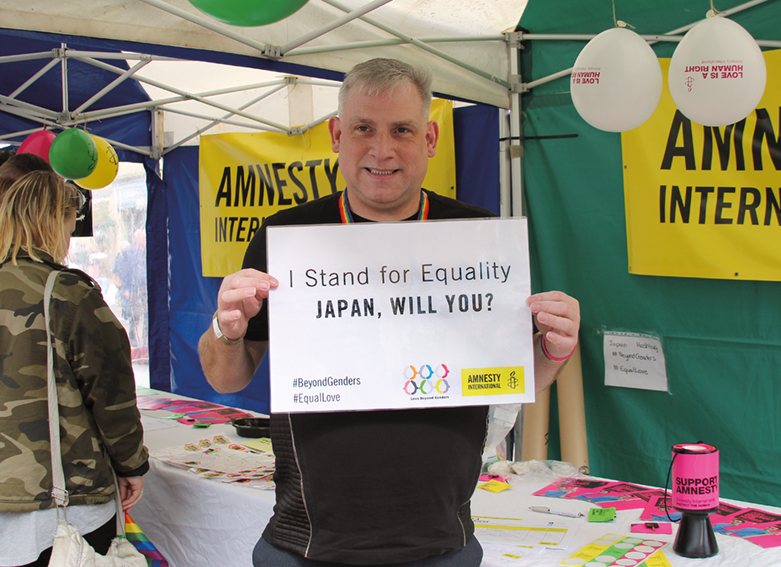 I didn’t really know what being gay was, I just knew I liked men more than women. This made me very frightened. I couldn’t really find out information or even know who to talk to, and I felt alone and quite isolated.

My secret kind of came out at school when I was 16. I stopped doing A levels as I was being bullied daily – how was I supposed to achieve good school results when I was fending off bullies all the time?

When I was 18 I had a job that took me away from the village to a city, and I still had my secrets. On a work night out, my colleagues warned me about a street that I should not go down, as that was where all the gays went. I took note of the street name and knew I would be there the next night. It was a private members’ club and they wouldn’t let me in. I had developed ways of acting straight so I didn’t get my head kicked in, and I couldn’t even convince a gay club to let me in. Eventually I just pressed the buzzer and kissed the bouncer, who let me enter.

In the club it felt like I belonged for the first time in my life and I was at ease with who I was. I met a guy older than me, ex-army, and we got into a relationship quite quickly. It was hard being in a relationship with a guy in public, though. Once we left the safety of the club we had to be very careful – no showing affection towards each other as it was illegal to be gay if you were under 21 and not very widely accepted at any age. You could get beaten up by anyone and the police were not exactly helpful in those days.

Just after my 19th birthday I found out that he had kept a secret from me about himself. We had gone to the hospital for his appointment for cancer and the nurse suggested to me that I needed a test. A little confused I had agreed, and two weeks later I was called back. The hospital told me that I had got HIV from my partner and that I would be lucky to live another six months.

Enter my coping strategy – my old friend alcohol, that had been there for me since I was 11. If I was going to die it was going be on my terms, dancing on tables, off my head on drink.

My partner blackmailed me to stay with him. He said if I left him he would tell everyone what I had got. I was very scared and very lonely. Freddie Mercury had died of Aids, so what hope was there really for the rest of us? I saw so many of my friends die of pneumonia and many just disappeared – so many people just dying in front of me.

For the next few years I watched my partner become very ill and slowly deteriorate in front of me. I was watching him die and in my head I struggled with pain and fear that this was going to happen to me quite soon. I would die a very slow, painful death.

At 25 I suffered liver failure. I woke up all yellow and was told that this was my body’s way of telling me I needed to stop drinking. ‘Don’t be so stupid,’ I replied. ‘I’m dying of Aids and drinking is my way of coping.’

When I was 28, after a number of failed relationships that I realise now were all based around alcohol consumption and not love, I actually met someone who didn’t drink. Maybe I would stop drinking now, I thought.

Sadly I had fallen in love with someone who was on heroin and crack cocaine and I quite quickly became addicted. My life took a whole new downward turn. The weight fell off and I really did look like an Aids victim. I was once again overwhelmed by feeling lost and lonely.

In March 2006 I overdosed on heroin and crack for the fourth time and I was taken to A&E and told I would be lucky to live for four hours. I remember the horror of people trying desperately to save my life, but thought that all the pain would be over soon – no more feeling unwanted, no more feeling that I wasn’t good enough, no more being battered in relationships. Dying seemed the only way for the pain to stop. I had full blown Aids, pneumocystis pneumonia (PCP), and not much chance of living.

My parents had rushed to the hospital and entered my room in masks and gowns. I heard my father say to my mother: ‘No father should ever have to bury his son.’ Obviously I had overlooked the fact that they loved me as their child.

As I left the hospital some six months later, I went to detox for two months at Hafen Wen in Wales. I was allowed home for Christmas and spent time with my family – my mum and dad, my brother, his wife and their two kids, my two nephews. This time was so valuable to me.

Then it was time to go to rehab in January, at Littledale Hall in Lancaster. I spent 12 months there and made a lot of new friends. I kept the fact I was HIV positive quiet, as I wanted to be able to sort my addiction problem out rather than deal with the health condition. I really didn’t think I would live long enough to complete the programme.

But complete it I did, and thought ‘what do I do now?’ I volunteered for a local re-use charity, Furniture Matters, then for Lancaster Advocacy. In July 2008, with the help of a few people, I set up an LGBT+ group called Out in the Bay. I wanted to support other people and let them know they had options, so that maybe they didn’t make the same mistakes that I had made in life.

Today I am the CEO of the charity, we are all volunteers and I am very proud of what we do and stand for. We work with many agencies to try and support the LGBT+ community. It can be very draining at times, as finance is limited. But we offer hope when sometimes there seems to be none, we value every single human being as an equal, and we pride ourselves on who we are, offering a safe space for people to just be themselves.

Robert Mee is chief executive of Out in the Bay