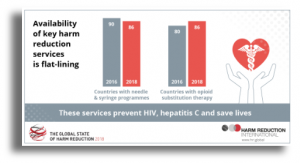 Despite injecting drug use being present in almost 180 countries, the number providing needle and syringe programmes (NSP) has fallen from 90 in 2016 to 86.

Policy changes have meant that NSP services have ceased to exist in Bulgaria, Laos and the Philippines, where ‘punitive drug policies result in people who use drugs experiencing harsh criminalisation’, the report states.

Although the number of drug consumption rooms worldwide has risen from 90 to 117 and OST provision has increased slightly from 80 to 86 countries, the latter is still ‘well short of what is required for an effective public health response’, says HRI.

The ‘worrying increase’ in opioid-related overdose deaths in North America has been met with a public health response that ‘broadly encompasses the principles of harm reduction’, says the report, albeit to ‘differing extents’ in the US and Canada. The emergence of fentanyl in Europe, meanwhile, should ‘instil greater urgency in preventing drug-related deaths’ and adds weight to the ‘already strong arguments for increasing the availability of naloxone and DCRs’. 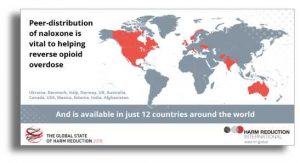 There are an estimated 15.6m people worldwide who inject drugs, with more than half living with hepatitis C and almost one in five living with HIV. Harm reduction in prisons remains ‘in a worse state than in the community’, the report adds, with just ten countries operating prison-based NSP and 54 OST. This is despite the fact that since 2000 the world prison population has grown  20 per cent faster than the general population, and ‘up to 90 per cent of people who inject drugs may be incarcerated at some point in their lives’.

Funding for harm reduction in low- and middle-income countries is just 13 per cent of ‘what is needed annually for an effective HIV response among people who inject drugs’, says HRI. ‘The prohibition of drugs, combined with the lack of capacity and effective health care coverage, means that life-saving and cost-effective harm reduction services are disregarded by health authorities in low- and middle-income countries where the burden of the drug-related health issues is the greatest,’ said chair of the Global Commission on Drug Policy and former Swiss president, Ruth Dreifuss.

‘The lack of progress in implementing harm reduction measures is a major concern and stunting progress in global health,’ said public health and social policy lead at HRI, Katie Stone. ‘Harm reduction is cost effective and proven to promote healthier societies. It is disgraceful that governments continue to ignore the evidence in favour of demonising people who use drugs. This is a crisis in need of urgent response.’