For many ex-service personnel the transition to civilian life can be a struggle, and it’s all too tempting to turn to the bottle to cope. DDN hears how specialist support provided by the charity Combat Stress is helping veterans get back on their feet. 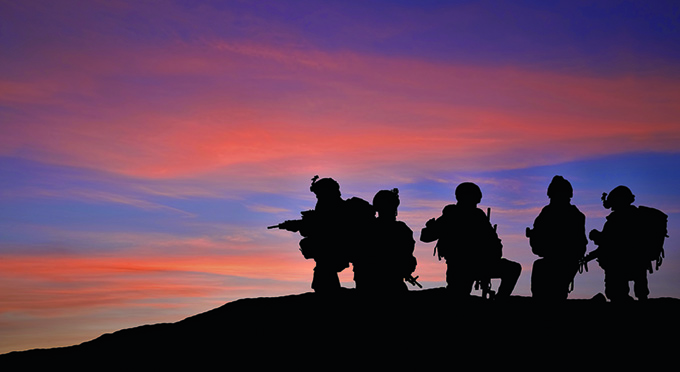 Adjusting to civilian life after a career in the armed forces can be hugely challenging, and that’s even without the PTSD that many veterans may be struggling with. Around 15,000 people leave the forces every year, and many try to cope with the transition by self-medicating – especially with alcohol, something that may have been a central part of their forces life.

It’s little surprise therefore that last month an Addaction report by researchers at Sheffield Hallam University, and funded by the Forces in Mind Trust, found that ex-military personnel with substance problems are far more likely to succeed in their recovery if they access veteran-specific services.

‘Following service in the armed forces, a small but measurable number of people struggle to transition into civilian life and can turn to addiction when trying to cope with these pressures,’ said Forces in Mind Trust chief executive, air vice-marshal Ray Lock. ‘It can be very difficult for such vulnerable people to have the confidence to speak up and ask for help. In some cases they may not even be aware that such help is available.’ This is backed up by research from Surrey-based charity Combat Stress, which found that veterans may put off seeking help for years, even decades, with many not accessing services until they’re in their 60s (DDN, June, page 4).

Combat Stress is the UK’s leading mental health charity for veterans, helping those struggling with PTSD, depression, anxiety and other issues. Originally founded just after World War I, it currently has more than 6,000 people registered for support and also offers specialist substance misuse services, which are always free of charge for veterans. The organisation works closely with the NHS to identify former service personnel who may have substance issues and help them engage with treatment.

Donna Bowman is a specialist veterans substance misuse nurse for Combat Stress, based at the Queen Alexandra (QA) Hospital in Portsmouth. ‘I’d been a specialist nurse for the hospital’s alcohol team for about seven years when I found out about this role, and the more I heard, the more I thought it sounded really interesting,’ she tells DDN. ‘My caseload is always between about 30 and 40, and I’ve seen around 130 veterans in total now.’

While most clients come from the hospital she also gets referrals from drug and alcohol services, GPs and veterans’ outreach services, along with some self-referrals. ‘What really appealed to me about the role was that you could do really assertive outreach in the community – you could pick up the veterans in the hospital then follow them up,’ she says. ‘I found that really exciting and rewarding as the one thing I always thought was a shame with my alcohol patients was that we couldn’t follow them up in the community.’

Another positive is that the veterans are ‘a great group of people to work with’, she says. ‘Once they get on a mission about stopping drinking, and they have support, they do very, very well.’

While that sense of commitment and determination can stand them in good stead when it comes to recovery, in other ways a military background can act as a significant barrier, however. ‘They’re just so proud,’ she says. ‘Plus in the military they’re used to being told to just get on with it, not ask for help and not really talk about things. So when they’re out in civilian life they think they should be able to cope with things themselves. They can be really hard to reach, and they leave it so long that by that time their lives can be in a state of ruin.’

A key skill when dealing with veteran clients is simply being approachable, she stresses, as is the ability to slowly build up trust. ‘That can take a while, but often they can be very sick when they come in as they’ve left it so long.’

Another crucial aspect is simply that ‘you do what you say you’re going to do’, she stresses. ‘It can take a while to establish their trust, but once you’ve got it you’ve got it forever. I’ve worked in intensive care so I’ve got also quite a lot of assessment skills, and unless someone can get their health back on track their life is going to be pretty miserable. So I’ll go to people’s houses, and I’ll get GPs and ambulances out because I’m not happy with how they’re looking.’

For the vast majority of her clients the problem is alcohol rather than drugs, she says. ‘It was such a massive part of their culture when they were in the military that it tends to be their crutch when something goes wrong. We do see people with drug issues, but it’s quite rare.’

She also provides support for family members on house visits, along with referring them to services like Al-Anon. Signposting her veteran clients – to housing, education, training, health and other services – is also a ‘massive part’ of the role, particularly as it’s not uncommon for some veterans to end up homeless. ‘I work with a charity called Veterans Outreach Support, which has a drop-in service based in a maritime hotel – there’s about 20-plus services under one roof, so veterans can turn up on the day and be seen by mental health teams, the Royal British Legion, [armed forces charity] SSAFA and loads of different services. So I have access to all of those at my fingertips really.’

Given the trauma that many veterans will have been through and the difficulties in adjusting to civilian life, could the armed forces themselves be doing more to provide support? ‘I do think they could,’ she says. ‘I think it might be getting better, but I do think in the transition period from when they leave the forces they could perhaps explain a bit more about where to seek help for alcohol problems and things like that, and provide information about what’s in their area in terms of support. When they come out it’s so different from being looked after and having that structure.’

Someone who can attest to that is her client Michael, whose Royal Navy career lasted more than 21 years. After leaving he worked full-time as an engineer on army camps, but it was when the work stopped that his drinking got out of control. ‘It just got progressively worse and worse, until it snowballed into about a litre of vodka a day,’ he tells DDN. ‘A ridiculous amount.’

Despite the extent of his drinking he found it hard to even acknowledge that he had a problem until his first contact with Combat Stress. ‘What made me sit up and take notice was the first time I ever met Donna,’ he says. ‘That was in January 2016, when I was in the QA hospital for the second time with a broken shoulder. She just turned up at my bed one day and the light bulb went on over my head. Up until then it hadn’t really dawned on me because I couldn’t see the wood for the trees. I was too close to the problem.’

Although he’s making good progress he’s aware that it can be a long road. ‘I’ve had a couple of blips,’ he says. ‘I went without a drink for about 16 months and I thought I had it under control, but I didn’t. It’s like any addiction, it comes up and kicks you in the backside, but generally I’m feeling quite optimistic.’

His only other experience of treatment, at a drug and alcohol drop-in centre, made him realise how much he values the veteran-specific service at Combat Stress. ‘The atmosphere and surroundings were not what I’d call conducive to help,’ he says. ‘A lot of people were only there because they had to be as part of their ASBOs or whatever, and were talking about how they were going to be taking drugs the moment they left.’ In common with other people with a military background he also struggled with the ‘sharing’ aspect of some treatment. ‘I’ve always preferred the one-on-one – I’m not a great group person – and I get on with Donna and all her colleagues brilliantly.

‘The thing I like is that they talk to you,’ he says. ‘They don’t talk at you or down to you – they talk it through, which being ex-service is what you need. I honestly don’t think I’d be here if it wasn’t for Donna and her colleagues. I can’t praise them enough. It made me realise that somebody actually cared.’