Home Features A foot in the door

Seeking healthcare can be daunting for homeless people. DDN visits a practice in north London that takes every opportunity to engage.

Read this article in DDN

‘We haven’t touched the sides of the people sleeping on the streets around here. Everybody comes to Camden, they come to Euston train station, they come to Kings Cross, there are millions of tourists marching up and down Euston Road all the time. So if you want to beg, it’s a good place to be.’ Paul Daly is the practice manager at Camden Health Improvement Practice (CHIP), an NHS service run by Turning Point which provides health services to homeless people. 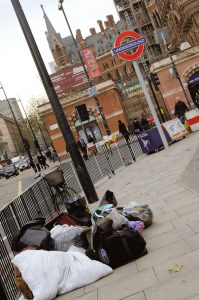 Walking from St Pancras and past Euston on the way to CHIP means navigating through people of all ages and nationalities, sitting on the street and in doorways. As a drop-in health practice, CHIP welcomes all of them without any need for ID. If you are homeless you can make your way to 108 Hampstead Road and join the morning queue.

At 9.20am doors open and the first nine patients are seen by the doctor. ‘That doesn’t sound like a lot, but they tend to be very complex,’ says Daly. If you have an emergency you can fill out a form and they will squeeze you in; otherwise you will need to turn up again the next day. Appointment slots are supposed to be 20 minutes per patient, but often run way beyond that. ‘We don’t restrict patients to one problem, but there’s a limit to what you can do,’ he says. ‘Some of the patients don’t present very often, so they’ve stored up a whole set of issues and we can’t manage them all.’ The practice has 800 patients at the moment – an increase of 25 per cent in the last two years.

An important routine for each new arrival is the comprehensive health check, lasting around 45 minutes, which includes tests for HIV and hepatitis B and C. This is seen as a golden opportunity to engage, explains Daly. ‘A lot of these patients don’t go to a GP at all – they let themselves get so ill they go straight to hospital and it’s an endless cycle. So at least if they’re coming in here and getting their primary care managed, they have a better chance of stopping that from happening.’

The small team has one and a half doctors and two full-time nurses. They feel very lucky to have the support of a volunteer GP who used to work at the practice and comes back twice a week to do medical reports. In common with everywhere else, budgets (and space) have been squeezed. There’s no longer room for the clothing store, apart from some socks and gloves. Strong partnerships with local hostels and drop-in centres have become more important than ever.

A doctor from CHIP goes out on his bike twice a week to visit the hostels and find ‘the really entrenched people’ who won’t come to the centre, maybe offering a prescription as an incentive to engage. Five or six years ago they were more of an outreach service, running a clinic at each hostel once a week. But it was an expensive way to run the service, needing double the staff and a lot more kit – and no guarantee that patients would be in the right place at the right time to see the clinicians.

The current model allows hostels to send their residents over to CHIP for treatment and holistic care – and the support works both ways. The area has built up a network of specialist support through its drop-ins and day centres, so there are places to refer young people, sex workers, and arrivals from other countries who might need all kinds of help. Peer support is also close at hand through the charity Groundswell, who will take people to appointments – invaluable help since funding is no longer available for the team’s in-house ‘navigator’ post. 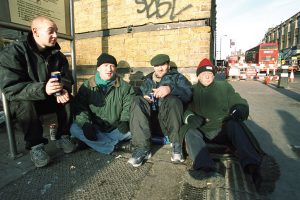 Coming through the door at CHIP represents an opportunity. ‘A lot of the time we find you have to do everything while the patient is right there in front of you,’ says Daly. ‘The minute they go out the door, you lose them again.’ Seeing them regularly gives a chance to address longer-term health conditions – although he points out that, sadly, many patients living in the harsh environment of the streets don’t actually survive long enough to develop late middle-age conditions like diabetes and COPD.

But having them in front of you means prescribing what they need: ‘You want them to come back, and if you take a rigid approach to it they won’t come back at all. Then we can work on their other issues – it’s a different concept of medicine to a mainstream practice.’

It’s a ‘massive challenge’ for the clinicians, he adds, as making a judgement on what to do with complex cases can be really difficult. The team’s weekly meetings are a focal point for agreeing the way forward for each patient, bringing in the other services as needed, or attending multi-disciplinary meetings outside. Complex patients might need expertise from mental health, drug services, social services, police and safeguarding.

With the dialogue created around their healthcare comes access to many sources of help. A hepatology consultant visits every two weeks from the local sexual health clinic and is ‘bombarded’ with patients wanting the new hepatitis C treatment. At ‘£40,000 a throw’ triage has to operate, through assessment by a panel.

Patients also have the opportunity to see an HIV consultant who comes in every fortnight, and there is support available for mental health problems and personality disorders. Many patients are referred to the specialist alcohol service in Camden, and Daly comments that ‘getting people to engage with the alcohol service is much harder than the drug service’.

The Citizens Advice Bureau (CAB) worker comes in once a week to help with benefits and housing – and is even more in demand since the benefits system moved online. Another vital visitor is the tissue viability nurse, who comes in one a month to support the nurses and do the more complex dressings. ‘We have patients who have huge leg ulcers because they’ve been injecting for years,’ says Daly. They might come to CHIP for a while, especially if they have come out of prison, and the nurse will get the leg to a point where it’s in a good state. ‘Then they’ll disappear and turn up two months later with the same dressing on, and it’s all gone back to square one again. It looks like something from a war zone.’

Unsurprisingly, the team who run this service ‘go over and above quite a lot’, whether it’s paying for an asylum seeker’s life-saving medication while paperwork is sorted or calling in the crisis team to help a patient with a mental health issue that might take hours and ‘blow the clinic’s schedule apart’. Producing calm from chaos has become second nature to a team that focuses on stabilisation in all its contexts.

There is naturally cross-referral of patients with the drug service upstairs, but the commissioning structure does not make this as easy or logical as it could be with CHIP being commissioned by NHS England and the substance misuse service commissioned by public health.

But Daly is appreciative that the CCG and medicines management team understand the nature of a homeless practice. ‘You can pay £35 just for one dressing, so our dressings budget is through the ceiling. And our antibiotics budget is a lot larger because we have a lot of infections.’ Furthermore, there are no predictable attendance patterns from one day to the next, summer or winter.

If the service was on TripAdvisor, they might have five star ratings; an equivalent endorsement would be those who still come back long after they’ve moved away. ‘People don’t want to leave us, so there are patients that have been here for 20 years,’ says Daly.

Sadly this may need to change as NHS England have told London homeless practices that nobody can stay registered with them for more than 15 months.

‘The theory is that after 15 months with us they will be cured and ready to go back to society,’ he says, ‘so you have to move everybody on, which is totally unrealistic. It was obviously written by somebody who has never come to a practice.’