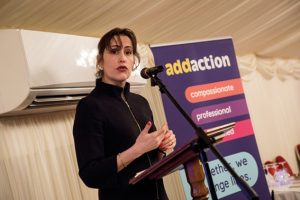 We are determined to deal with the scourge that is stigma,’ said Lord Carlile at Addaction’s 50th birthday event at the House of Lords. New drugs minister Victoria Atkins (left), under secretary of state for crime, safeguarding and vulnerability, said that stigma was an obstacle to recovery and gave her commitment to exploring options for protecting public health funding for drug and alcohol treatment.

‘I got to the point where I accepted stigma – I was a drain on society,’ said Les, an Addaction volunteer from Weston-super-Mare. ‘I started to believe I was a thief and a junkie – I started to accept it in the end. People focus on failures – they don’t focus on people who actually make it. Addaction has given me a purpose in life. We judge people for their behaviour and we don’t look underneath. To judge them compounds the shame.’

‘Going into the service building was when my stigma started,’ said Hayley from Wigan, who had to let her ex-partner take custody of their young daughter because of her problem drinking. ‘I felt judged going in, and this made me eventually drop out of the service. But then Addaction adapted to me and I had home visits. I’ve been stigmatised at my daughter’s school by staff and other parents, but Addaction made me a recovery champion and really helped me.’

‘We want to confront stigma head-on and this means educating the public to increase empathy and understanding for those tackling drugs, alcohol and mental health issues,’ said Addaction CEO Mike Dixon. ‘By challenging stigma, we believe more people will come forward for support and more people will recover and reach their potential.’

Harry Shapiro, DrugWise director (right), was among prize-winners of the Marsh Volunteer Awards, presented by Addaction and the Marsh Christian Trust. The awards recognise those who have helped transform the lives of people in recovery, and his prize for media recognised his articles, lectures and national media interviews representing the views of alcohol and drug users and challenging stigma.

‘Harry is hugely knowledgeable and presents his information and evidence in a skilled non-judgemental way, acting as an advocate for service users and their family and friends,’ said Jon Murray, Addaction’s community engagement and implementations lead, who handed out the prizes to winners. 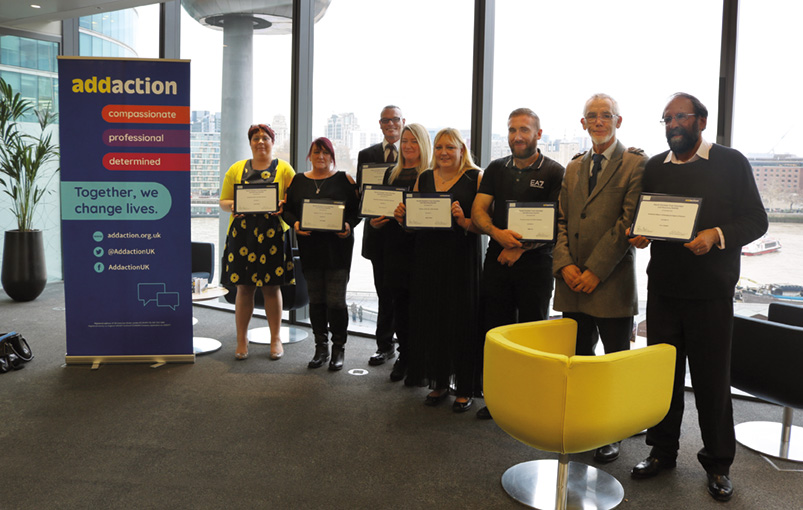