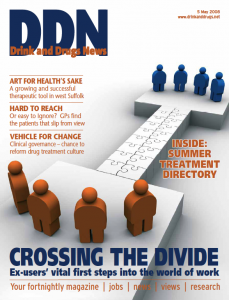 Talking to Tony in the warmth of the Brighton Conference Centre I asked him how he coped with homelessness, during his eight years on the streets. ‘I just did’, he said, ‘you get used to it after a while. You hardly notice how cold you are – you get by.’

You could ask the same of some drug services and general practices: how do you deal with the homeless people that come to you? ‘You just do – you get used to them after a while.’ Does that mean they’re being treated as people who need help like anyone else – or as someone to be hurried out of the waiting room before they cause offence?

Sharyn Smiles, addressing an audience of mainly GPs at the latest conference on managing drug users in primary care, was an exceptionally engaging speaker, and I found it very difficult to imaging her in the situation she described herself living with a few years ago, navigating the city by people’s shoes (see page 12). How do people like Sharyn become so invisible? Some of the stories aired at the conference’s Q and A sessions shed some light on the situation: some GPs were having to stop their receptionists from turning homeless people away – staff who were using bogus rules for why they couldn’t join the practice, or making the conditions difficult by demanding proof of identity through a recent utility bill. ‘We need to get tough on these practices and remind them what the law is,’ GPs at the conference agreed.

The challenge is taking this action beyond this specialist group of sympathetic and highly committed GPs, who have a special interest in making it easier for those in most need to find them and get treatment.

Closed lists are a disgrace: GPs can register anyone at their practice, so there is no excuse for turning anyone away because they can’t produce evidence of an address. No one should be at the mercy of chancing upon a good outreach worker.