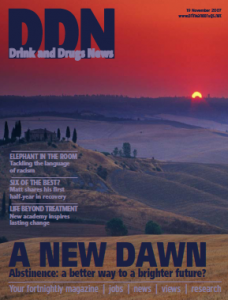 ‘Before all I had was an existence, but now I have a life that’s worth living,’ says Matt, who was six months into recovery when he wrote the article on page 11.

Matt would not be writing the same story if he had decided not to pursue the goal of becoming drug free. His detox was hard work and painful, but for him the process of rehab was about stripping everything in his life down and getting to the root of why he was using in the first place. Maintenance would have seemed like a sticking-plaster option: he needed to prove to himself that he could achieve the seemingly unachievable, to give himself the same chances as anybody else.

Our cover story makes the case strongly for the goal of abstinence in treatment, but equally it highlights the necessity of having that choice. A service user is quoted as saying he was maintained on a methadone script for years without being encouraged to go drug free. Another expresses his regret that he did not explore 22 years ago the opportunities of getting off drugs and learning the life skills he was discovering in rehab. That’s a long time not to have explored other options; what could he have done sooner with the right support?

Of course prescription drugs including methadone have a hugely important role in making stabilisation possible – but they must never become an excuse for not offering anything more.

Jim McCartney’s academy (page 10) opens up possibilities beyond being able to function OK. He is ambitious about making ex-drug users contenders in the workplace, with a full armoury of social skills and the motivation to do well. It emphasises the argument reiterated in our letters page and in FDAP conference presentations – that It’s not about reducing the options to ‘either harm reduction or abstinence’, but about making sure we have both, at the time the individual is ready – and this can not be emphasised enough in a climate of fear over budgets.